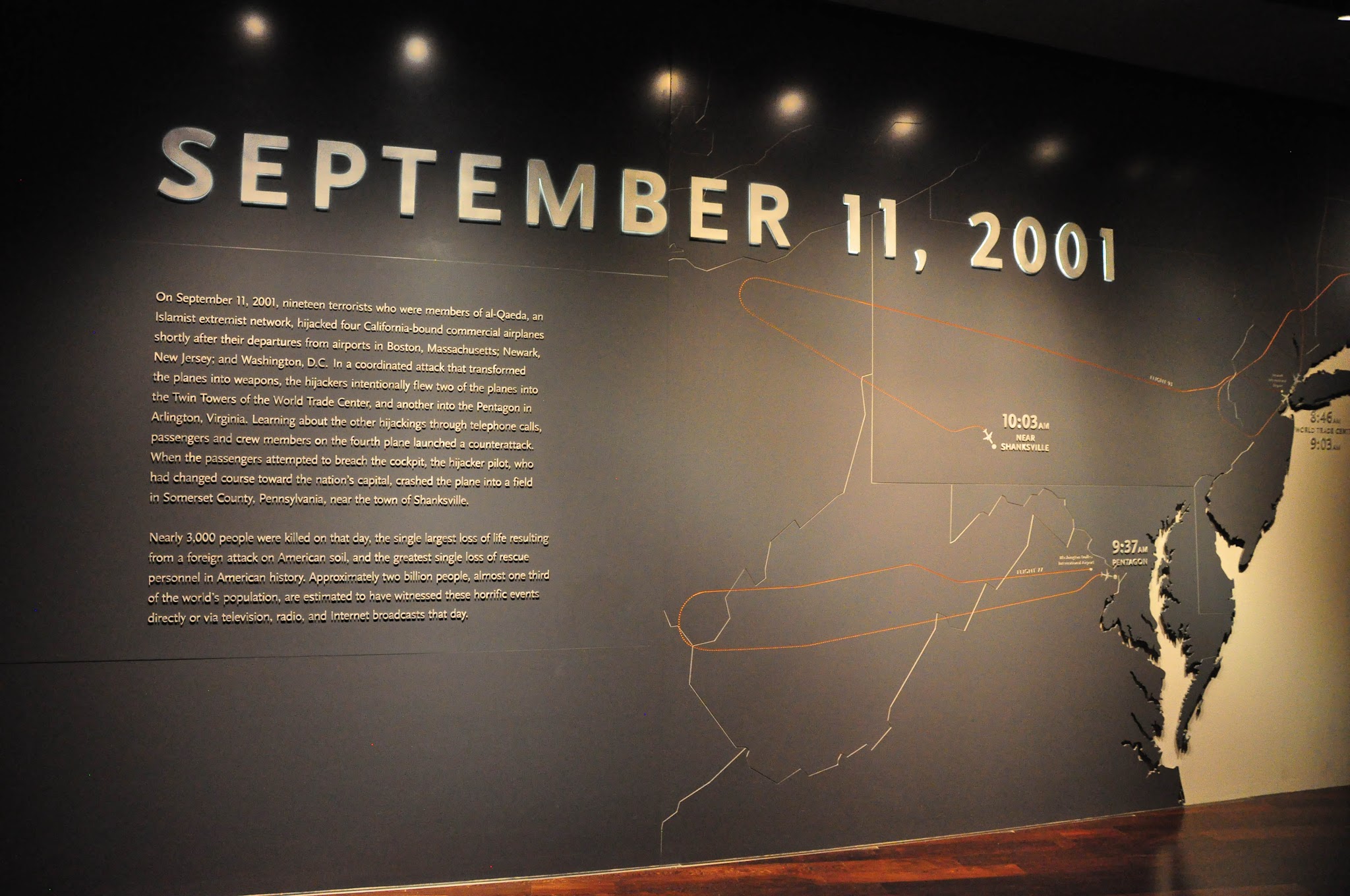 The 70-foot high columns known as “tridents” because of their three-pronged tops, were salvaged from the wreckage of the North Tower. 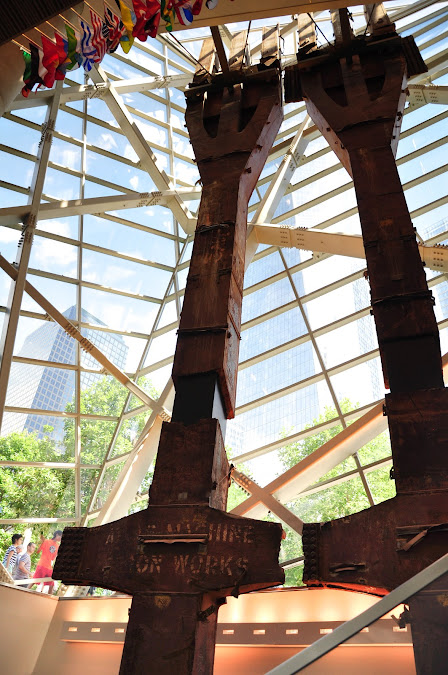 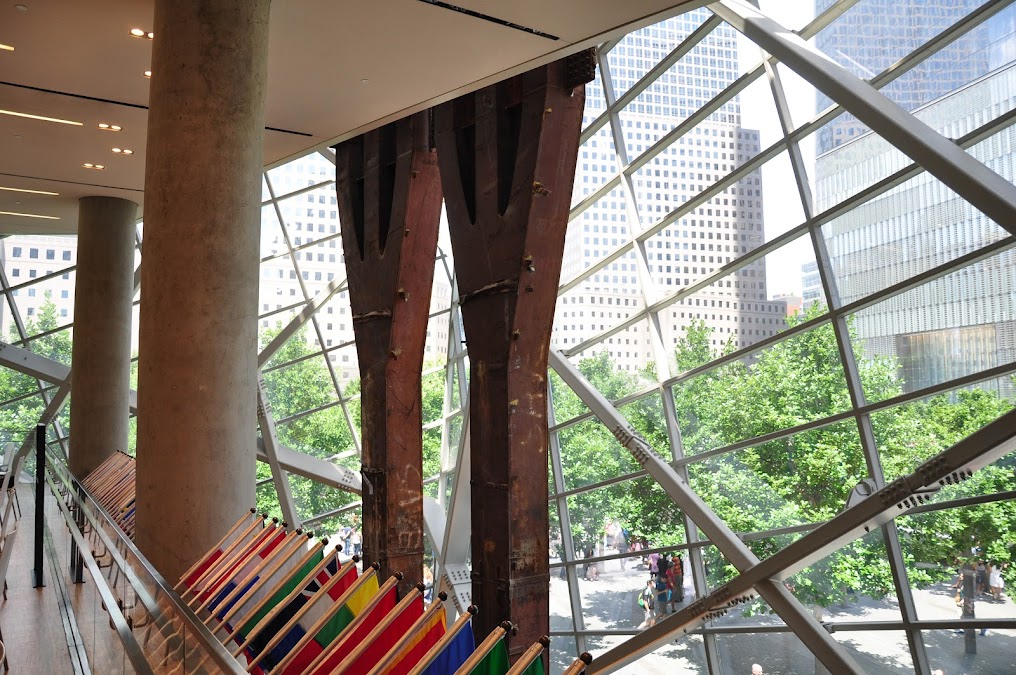 Main hall of the museum, showing the last column standing at center, and the "bathtub" retaining wall around the foundation at left. 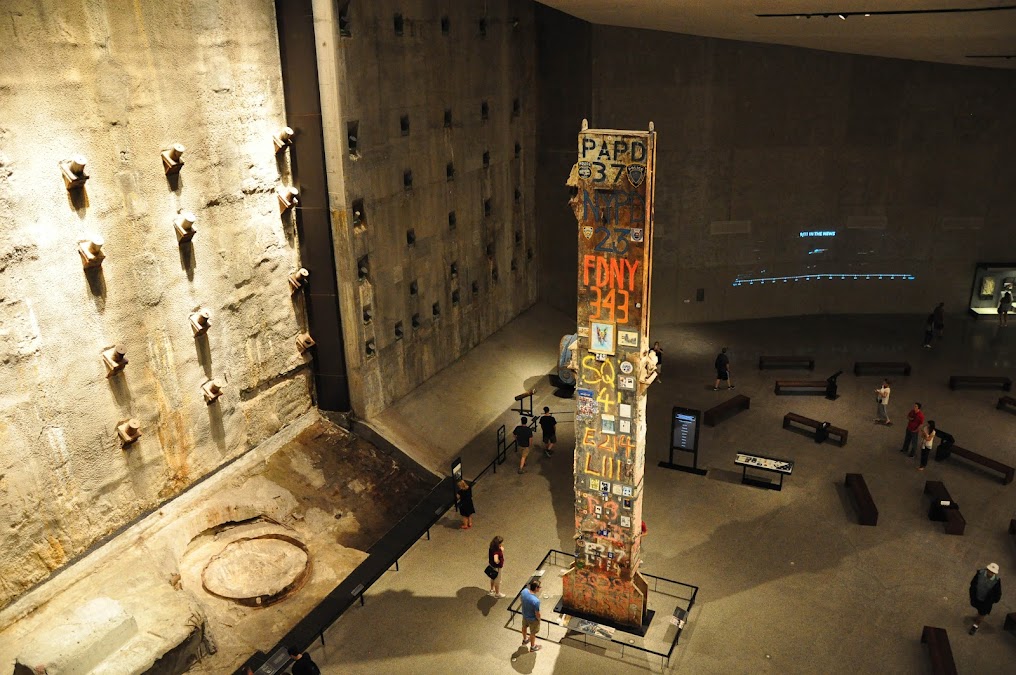 As the recovery at the World Trade Center site neared completion, the Last Column, a 58-ton, 36-foot- tall piece of welded plate steel, was removed from the site in a solemn ceremony on May 30, 2002. In the weeks that followed, recovery workers, first responders, volunteers and victims' relatives signed the column and affixed to it memorial messages, photographs, and other tributes.

This piece of steel, once part of the north façade of the North Tower, was located at the point of impact where hijacked Flight 11 pierced the building at the 93rd through the 99th floors. 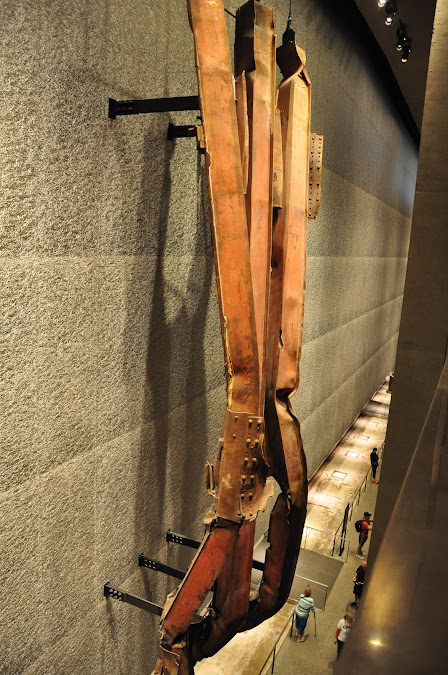 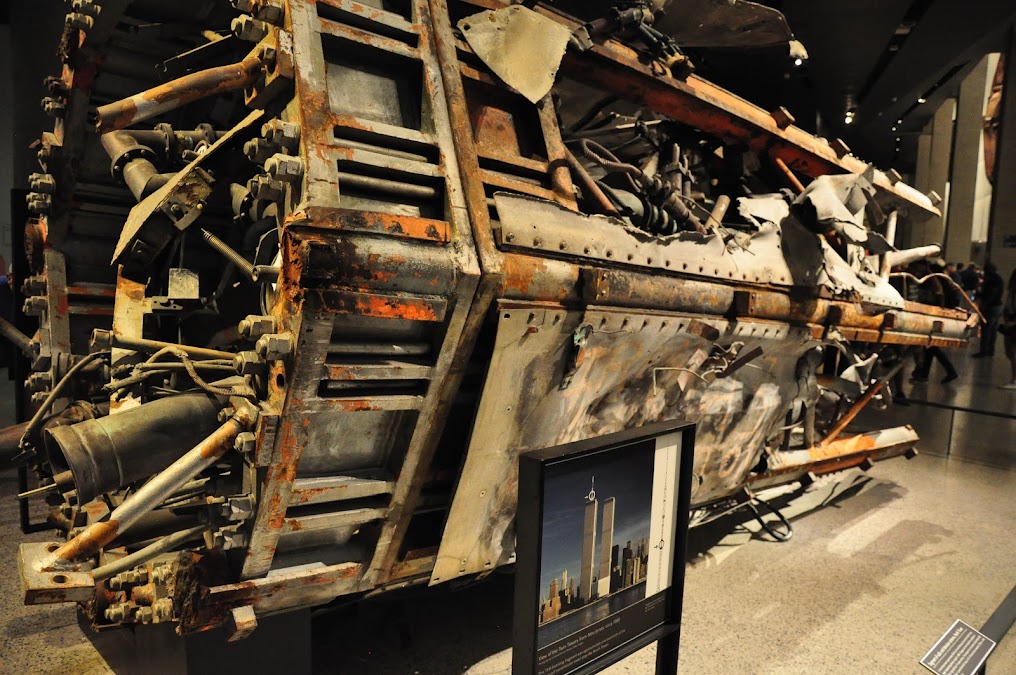 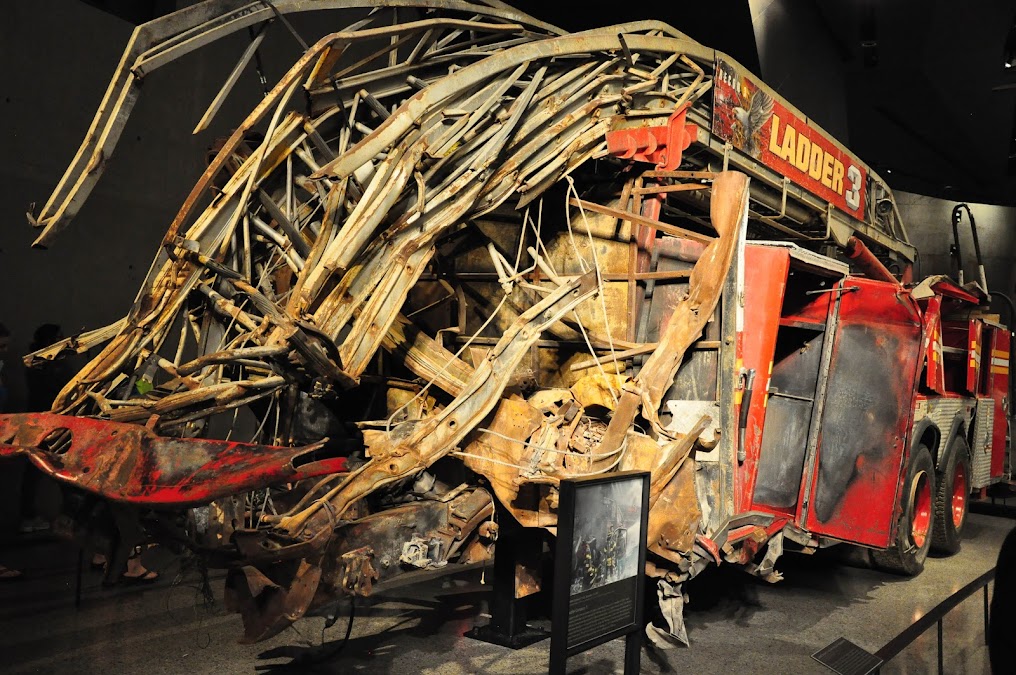 Members of FDNY Ladder Company 3, located in Manhattan’s East Village, bravely responded to the World Trade Center on September 11, 2001. Led by decorated Captain Patrick “Paddy” John Brown, Ladder Company 3 asked a dispatcher to deploy its members to the disaster. Eleven of them, many of whom had just gone off duty after finishing their overnight shifts, entered the North Tower.

The rear mount aerial truck was parked on West Street near Vesey Street. When the North Tower collapsed, the truck was damaged beyond repair, with its entire front cab destroyed.

The 9/11 museum pavilion has a deconstructivist design, resembling a partially collapsed building (mirroring the attacks). 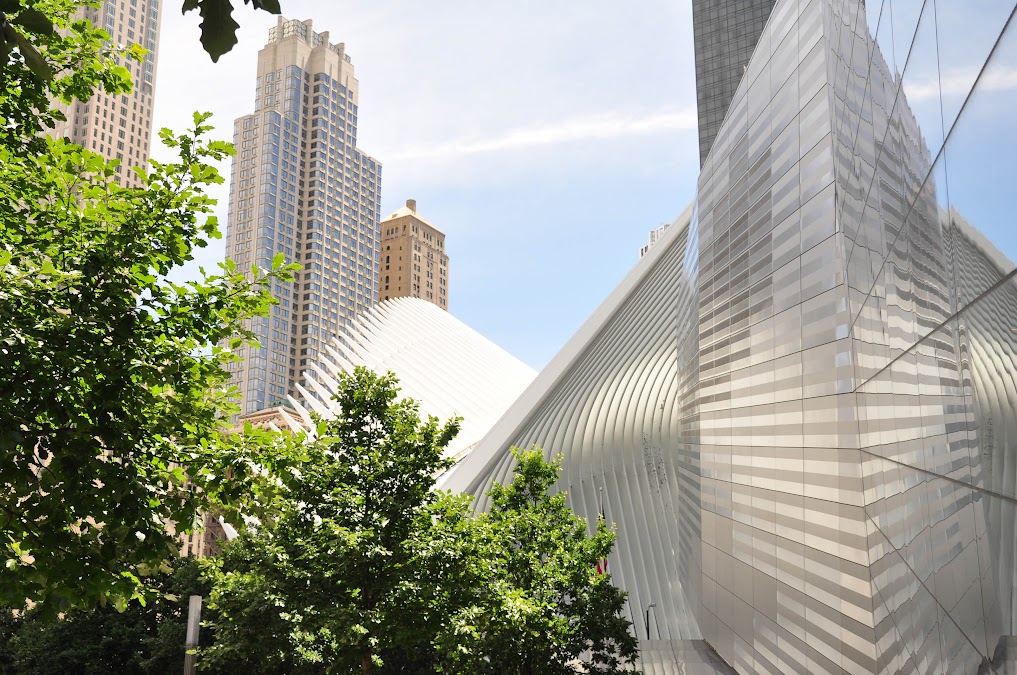 The Memorial’s twin reflecting pools are each nearly an acre in size and feature the largest manmade waterfalls in North America. The pools sit within the footprints where the Twin Towers once stood.

The names of every person who died in the 2001 and 1993 attacks are inscribed into bronze panels edging the Memorial pools, a powerful reminder of the largest loss of life resulting from a foreign attack on American soil and the greatest single loss of rescue personnel in American history. 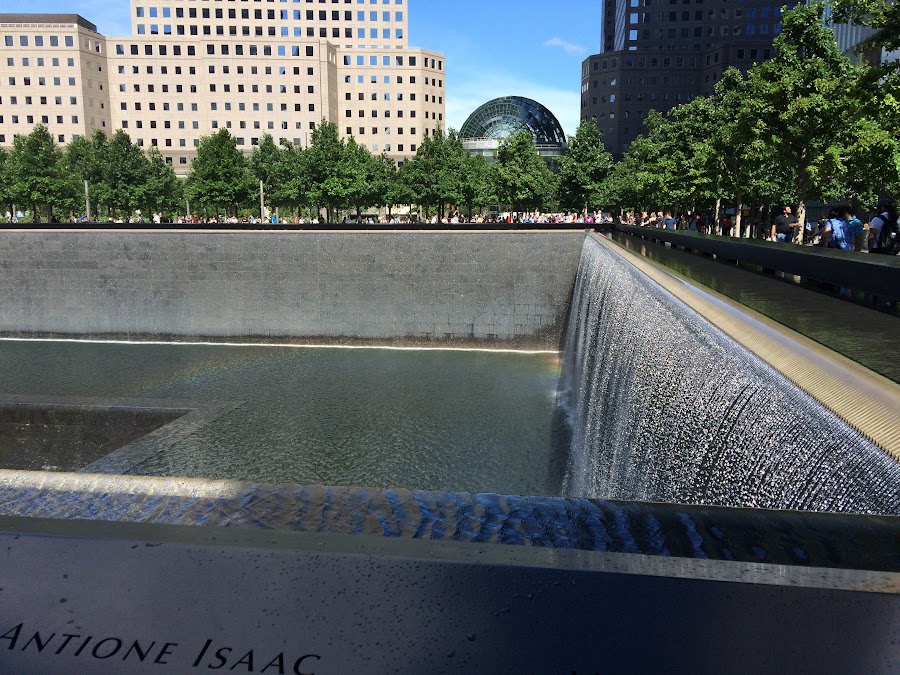 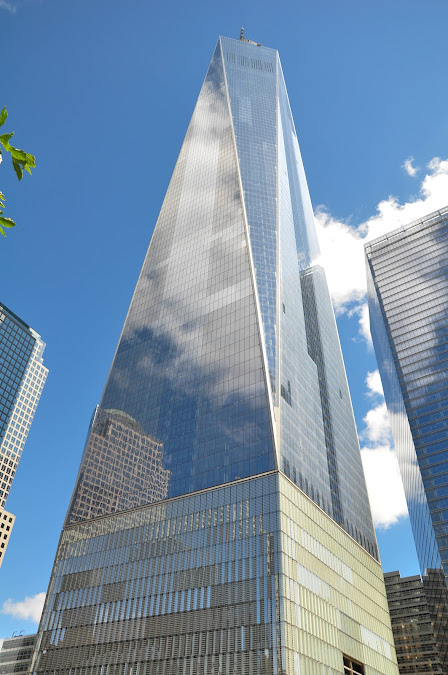